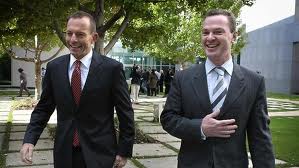 Yesterday, a reporter on Sky News was reporting that the Opposition was wrong-footed in Question Time and that they just kept trying to hammer the point about whether any school would be worse off.

Strange way of looking at things. That’s like saying the police have been completely confused by a criminal’s confession, because they still keep asking questions about the crime.

Make no mistake – the apparent back-flip from Abbott and Pyne promises nothing. It simply adds the funding for the states and territories who didn’t sign up, and promises to keep total funding the same. Something which they had actually been doing for the past week. It was just that nobody believed them any more.

As far as ensuring that the states distribute it as the Gonski report was recommending, well they’ve got rid of the “command and control” aspects of the funding. In other words, the states can slash their own spending on education if they choose to.

So it’s the classic pea and sell trick. We think we know where the pea is, but it’s actually in the hand, so whatever shell we pick, we’re wrong.

But instead of an analysis of exactly what their “backflip” means, we have various media outlets, attacking the Opposition for still asking questions about what it means in terms of individual schools.

“The announcement, however, left Labor with nothing but the questions it had written before the change in the wind, and apparently too little time to change tack.

Shorten and his colleagues forged ahead with demands for guarantees that no school would be worse off.”

Well, attacking Labor leaders has been popular over the past few years – even from within the party – but it does seem strange to be focusing on them at a time like this. The Coalition are the Government of Australia. They will be making the decisions, and it’s these decisions which will affect the lives of the people. An analysis of what the Opposition’s doing seems a bit like a navel-gazing exercise at the moment. Certainly, comparing Shorten’s day yesterday with Fraser’s decision to call an election, only to find that Hayden had been replaced by Hawke is a bit like comparing Aung San Suu Kyi’s house arrest with the decision by Freddy’s parents to ground him for the weekend.

As for calls for a double dissolution, as I’ve pointed out on this site previously, it’s not actually possible yet. And certainly, in spite of one reader’s passionate demand = “Tell Bill and the rest of the ALP to pull their fricken fingers out of their asses and call a dbl dissolution NOW!” – it’ll be Abbott who calls it, not the Opposition. He certainly isn’t likely to call it, if he thinks that he might lose.

There are still plenty of questions about the Government’s alleged change of mind. Let’s hope that the MSM keeps asking them and not just sites like this.

(BTW – compare today’s Age/Sydney Morning Herald editorial with my blog of a few days ago. Should I sue them for plagiarism?)