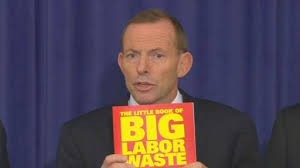 “We know that politicians are always trapped between the long-term need for substantial policy reforms and the short-term pressures of winning elections, which, combined with vested economic interests, generally means that maintaining the status quo becomes the default option. In this case, the status quo is our carbon-based economy. To dismantle it would impose serious short-term risks and costs, as against the even more serious long-term risks and costs of not doing so. And for politicians, the short-term risks always loom larger than the long-term ones, as they do for most of us in our daily lives.”

“I’m focusing not on what might happen in 16 years’ time, I’m focusing on what we’re doing now”

Now some of you may think that it’s a problem that government’s have a tendency to only think in terms of the electoral cycle. Abbott – it would appear from his own admission – doesn’t even think that long term. (Of course, some of you will undoubtedly comment that the words “that long term” were superfluous, but stop taking cheap shots, I’m trying to make a serious point here.)

Ok, I know that roads are mainly a state responsibility but Abbott has said that he wants to be known as the infrastructure government, so I thought that this quote from “Focus” by Daniel Goleman was appropriate:

“Traffic jams? The shortsighted solution means building more and wider roads. The new capacity brings short- term relief in congestion. But because it’s now easier to get around, those very roads mean people, stores, and workplaces spread throughout the region. Traffic over the long term increases until the jams and delays are just as bad as, or worse than, before— the traffic keeps growing until it’s so unpleasant to drive that further growth in trips stops. “Feedback loops regulate congestion,” says Sterman. “Anytime you have more capacity for traffic, people take more car trips, move farther away, buy more cars. As people spread out, mass transit loses viability. You’re trapped.” We think we are held up because of that traffic jam, but the jam itself emerges from the dynamics of highway systems. The disconnect between such systems and how we relate to them begins with distortions in our mental models. We blame those other drivers clogging the road but fail to take into account the systems dynamics that put them there.”

Yep, when he said, “I’m focusing not on what might happen in 16 years’ time, I’m focusing on what we’re doing now”, he was telling the truth for once.

Ok, let me turn all Andrew Bolt for a moment and use hyperbole to show exactly what Abbott is saying.

“What do you mean that by sunbaking/smoking/drinking/taking drugs/having unprotected sex that I’m putting my life at risk? I’m not thinking about what might happen in the future I”m focusing on what I’m doing right now, and let me tell you, man, it’s awesome.”

All right, Abbott never said “awesome”. But he did just about express the view of every teenager who maintains that they don’t need to study because the exam isn’t for another two weeks.

Yes, yes, I know if I keep using logic like that, I could end up Prime Minister of Australia, because from what I hear, they’re on the lookout for one. But that’s not now, so who cares?

By the way, is it true that Abbott closed the G20 by telling everyone that it was hard being PM, because, while he thought he’d have unlimited power, he couldn’t even get Julie Bishop to wash up the dishes after Cabinet meetings, even when he pointed out that he was also Minister for Women and that she wasn’t even a feminist? Once, I would have just presumed that it was unfunny satire, but ever since Barnaby Joyce was made a Minister, I’ve never been quite sure of such things . . .