There’s nothing quite as pathetic as watching a former Australian prime minister trying to redress a less than stellar political career. That Tony Abbott would use the Margaret Thatcher Lecture to do it, however, seems to fit nicely into his Anglophilic world view.

The event itself, celebrating a former UK Prime Minister who was far more arrogant and divisive than Abbott, seems a fitting place for him. No UK leader in living memory evoked such hatred for the way she so callously destroyed working class livelihoods.

Perhaps one should stop wasting good time writing about Tony Abbott. After devoting the last two years to his downfall and now celebrating that most joyous event, I would prefer never to pen his name again.

But after watching some of his Margaret Thatcher Lecture as he addressed that most pompous of audiences at the Guildhall in London, it became apparent that he is destined to follow another former PM and continue to embarrass himself and us along the way. It seems he is going to keep my keyboard working a little longer.

It is sad to watch someone in decline try to establish a positive legacy. It is worse when that effort is filled with such poisonous vitriol filled with such anti-human, anti-Christian values. As Alan Austin suggests, Abbott is in danger of being “consigned to the bin of foreign, right wing nutters along with Sarah Palin, Geert Wilders and Pauline Hanson.” 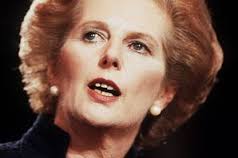 Margaret Thatcher, on the other hand, was the one who took on Argentina’s President Galtieri when he invaded the Falkland Islands. Against the advice from the Ministry of Defence she dispatched a Naval Task Force to reclaim them.

The Argentine invasion was a bizarre act by the ageing president in an attempt to deflect attention from his country’s appalling human rights record and its economic malaise.

The Falklands incident, however, could have been handled effectively through diplomatic channels over time. After all, it was a worthless rock in the Southern Ocean that meant little to either side. But Thatcher decided a show of force was necessary.

The result: Britain suffered 258 killed and 777 wounded. In addition, 2 destroyers, 2 frigates, and 2 auxiliary vessels were sunk. But they did reclaim their islands. For Argentina, the Falklands War cost 649 killed, 1,068 wounded, and 11,313 captured. In addition, the Argentine Navy lost a submarine, a light cruiser, and 75 fixed-wing aircraft.

As we have all witnessed recently, Tony Abbott, as Prime Minister, displayed an obsessive interest in defence and a willingness to commit Australian defence personnel to foreign conflicts. It is reasonable to speculate he would have gone further had his hold on the top job been stronger.

In his address to the English Lords and ladies, he suggested that placing boots on the ground in Syria was a necessary component to defeating ISIS. His use of the dreaded ‘death cult’ slogan was an embarrassment that, fortunately, the few who heard it, would not have understood.

But, there is little doubt that a ‘Coalition of the Willing Mark 2’, if it was gathered, would have seen Australian soldiers caught up in that conflict if Abbott was still in charge.

We are a better nation for his removal from such a powerful position. It was a strange act on Abbott’s part to make such divisive comments to a foreign audience while still a member of the Australian government. It is hard to see Malcolm Turnbull agreeing to such a scenario.

Turnbull avoided chastising him in public, but I would be surprised if that was the last Abbott heard about it. Thankfully, the address was largely ignored by the international media, but not by those were keen to satirise it.

Abbott’s term as PM is now little more than a blimp on the radar and we have regained our self-respect. This, however, does not mean to say we are being governed well. We are not. Those appalling asylum seeker detention tactics are still in play and our economy is still heading south. The latest CPI figures are a prelude to recession.

These and other issues will test the Turnbull government in the coming months. If Labor is to mount a serious challenge to counter Turnbull’s popularity, something will have to be done about Bill Shorten.

But somehow, that hurdle pales in comparison to the one the nation has already cleared. We have rid ourselves of one right wing nutter. There are still some around though and they need to be exposed for the danger they represent.