A week or so out from Joe Hockey’s second attempt at bringing down a national budget, what are we hearing? Not much. It will be dull and routine, boring, the job of fiscal repair is half done and so on. What rubbish. Behind all the upfront rhetoric we are hearing, the calming assurances and so on, both the PM and the Treasurer are running scared.

The overwhelming rejection of the 2014 budget, one that was so poorly crafted, has left our fearful duo so concerned they are keeping their twin mouths shut for fear this next one is sunk before its maiden voyage.

Unlike last year when they mistakenly thought anything they brought down on budget night would be acceptable given all the scare mongering they engaged in during the election campaign, this time the pressure is on them to show some actual skill.

A bad review this time will be disastrous for them both. In reality, however, they are both on a hiding to nothing. They cannot avoid a deficit, they cannot afford the slightest suggestion of unfairness. They won’t be able to effect any significant savings which only leaves them with some form of revenue raising, either through increased taxes or removal of tax expenditures.

In short, they’re stuffed either which way. With the 2014/15 budget outcome likely to peak at a $50 billion deficit (it was originally going to be $18 billion) and the national debt at $359 billion, an embarrassing $75 billion more than when they took office in September 2013, their economic credibility has been well and truly shattered. 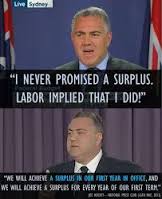 They will, of course, continue to blame Labor for not passing their dumb ideas and their blatant but miscalculated targeting of the poor for that blowout. But the man in the street has already seen through all that. What the man and woman in the street see is sheer incompetence.

That is what has our dynamic duo so concerned. They are afraid this year’s budget will solidify a perception of dumb and dumber repeating their first performance. Even the business community has gained that perception and awaits with some trepidation at what might hit them between the eyeballs this time.

During the course of 2014/15 there have been numerous suggestions put forward by non-economists, but clearly people better equipped than either Abbott or Hockey, to help them see the error of their ways. Those suggestions given freely, which highlight the extraordinary waste in tax concessions granted to the wealthy, have been heard, but we are yet to see if the advice has been taken.

It remains to be seen whether dumb and dumber have seen the light. I suspect they will make an attempt to rein in some concessions but not too much for fear of alienating themselves from their cigar smoking mates in their Ivory towers.

Deloitte Access Economics are suggesting a $45.9 billion deficit this year and a $14 billion blowout on next year’s estmates. For 2015/16, I expect a self-defeating deficit pitched around $20 billion but, like this year, finish up around $50 billion. Self defeating because it will not be a deficit that produces anything that adds value to our GDP.

We would be better served if they budgeted for a deficit around $100 billion if that included some infrastructure projects that relieved our unacceptable levels of unemployment and contributed to our national wealth. 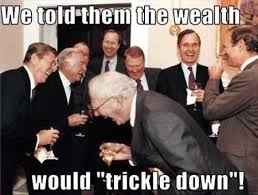 But these amateurs won’t be doing that. Their neo-liberal ideology doesn’t allow for that. Their household budgeting mentality doesn’t understand how different their position is from our households. Their opposite numbers in the UK don’t understand that either and are about to feel the pain because of it.

So, when the budget is presented to parliament next week, listen to the rhetoric, the spin and the doublespeak, but don’t be fooled by the numbers. By this time next year they still won’t add up to an improvement in GDP or employment.