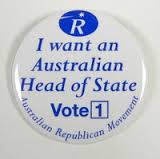 Author’s note.
The latest Essential Poll shows that 47% of Australians support a Republic 32% don’t and 20% have no opinion.

Royal Parade, in the Melbourne suburb of Carlton is a magnificent leafy tree lined boulevard. It may not match the historical importance of St Kilda Road but for me it is where my Australian patriotism birthed.
At the North end of Royal Parade where the long journey to Sydney begins is the home of the Carlton Football Club. Australian Rules football is uniquely Australian. I played the game with some success and I have never lost my love for its indigenous flavor. It was at this ground that I saw my first match and passages of play remain indelible on my mind more than sixty years on.

However, this boulevard occupies another memory. The year of 1952 saw the coronation of Queen Elizabeth II and in 1954 the new Queen visited Australia. On this occasion her motorcade from Essendon Airport was to take her to the city via Royal Parade and school children lined the route. We were given a small Australian flag and a Union Jack. I was familiar with our flag because we raised it every day at school. All the children waved in joyous spontaneity but I refused to wave the English flag and tossed it away.

One teacher gave me a decent clip behind my left ear but I would not conform. I sauntered off in adolescent anger and wagged school for the remainder of the day. To this day I cannot explain my journey into republicanism. I was too young to understand the ramifications of it all. Because I had spent my early childhood (with illness) in a home and attended five different schools in the space of six years I was really not qualified to form a definitive view on anything.

I left school at 13 and started work before my 14th birthday. I am, in the main self-educated. I suppose I could have been influenced by the Irish on my mother’s side but I think it was more the adornment of all things English in the society of the time in preference to Australia that took me down the republican path. Having said that, probably the socio economic environment in which I found myself helped form my views on social justice and other things.

I have always found this nationalistic worship of individuals (usually with no redeeming features) rather odd, if not dangerous. So when as a teenager I went to the flicks or on any occasion where “God Save The Queen” was played I refused point blank to stand for the anthem. In fact I often wondered what it was that she needed saving from.

When in discussion about war and people talked about fighting for the mother country, Queen and flag I would simply say, how preposterous, we fight for what we believe to be right. Not a piece of cloth or person. I felt we owed them nothing anyway. After all Churchill was willing to sacrifice Australia for Briton’s gain during the Second World War. We were lucky that John Curtin stood up to him. Churchill even resisted the return of Australian troops from the Middle East to defend their own country; he wanted to use them in Burma to defend India against the advancing Japanese.

At this time in my life, growing up in Australia where the Prime Minister was ostensibly more British (and spoke like it) than the British and people felt they owed the mother country something, although they couldn’t explain why. So I carried my republicanism in my back pocket until the Australian Republican Movement was formed with Malcolm Turnbull at its head. I worked diligently for the cause during the 1999 referendum and had the honor of introducing former Premier Sir Rupert Hamer at a function.

There is no doubt in my mind that we had the right model to take to the people. We felt we had a reasonable chance of success but we were overwhelmed by the negativity of the media. Of course John Howard acted like he was being perfectly reasonable but he had his pit bull terriers Tony Abbott and Nick Minchen distorting the facts with outlandish lies and Howard never once repudiated them. In fact Tony Abbott has never lost the capacity to tell the most outrageous untruths. Well he’s probably better at it now. One of course has to wonder why such a serious Catholic who knowingly accepts that one of his faith is by birth ineligible should support the monarchy at all.

So the country lost interest in the matter and it is generally accepted that until the current Monarch retires or dies, our apathy shall continue. Malcolm Turnbull believes this will be the catalyst for action and is in all probability correct.

The way forward is through a non-binding plebiscite with a simple question. For example.

“Do you think Australia should become a republic with an Australian as its own head of state?”

A majority of us would support this and it would pave the way for exploration and development of various models. And with consensus the final model would evolve. As I said earlier, I found nothing wrong with the original model. That being that from a short list the Prime Minister puts forward a person who is then given approval with a two thirds majority by a joint sitting of both houses. I would argue that the people elect the Parliament and then entrust their representatives to appoint a President on their behalf.

After all they entrust them to run the country. For those open to a direct election I would simply warn that this method would actually politicise the appointment. Suitable candidates may not be willing to stand in an election and would decline. They would not be interested in a popular contest. Conversely many unsuitable people would and could win on the basis of popularity.

The British Monarchy to my way of thinking is undemocratic and inequitable in so much as it goes against commonly accepted Australian values such as fairness and egalitarianism. Currently their head of state is selected not on merit but by the principle of hereditary male primogeniture (although that has since changed) and of course Catholics being specifically ineligible. This is discriminatory and unfair, and wouldn’t be allowed under the anti-discrimination provisions of Australian law, yet is still the method of selection for the Australian head of state.

Given that the people were fully informed and educated on the proposals for an Australian Republic with an Aussie as head of state and a consensus agreed upon, then we could proceed to a referendum. If successful, we would then be able to move forward into the new millennium as a fully free, united and confident nation. After 110 years of federation, we have grown up and if we are to take our place in the world, we must break our last constitutional links with England.

It is utterly preposterous that we don’t have an Australian head of state. Imagine if during the course of the recent hung parliament we had a President of the calibre of Sir William Deane or indeed, the current Governor General, Quentin Bryce. Although a ceremonial head of state his/her quiet calm could have reduced the toxicity of public debate that has insinuated itself on the Australian public during that period.

I recall after the referendum reading Malcolm Turnbull’s book “The Reluctant Republic” where he accused John Howard (The lying rodent George Brandis called him) of breaking the hearts of Australians. He was in fact correct. He dudded us and this Australian shed a tear.