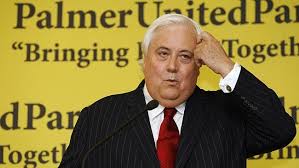 May I call you Mr? It’s not Sir Clive yet is it? I’m sure it will be in the offing should you aspire to a knighthood – it’s Tony’s best reward for pre-eminent people like you.

May I congratulate and commiserate with you on your entry into the sordid world of politics. I have watched your campaign and realised that you are a man who wants to get things done, a trait I admire. You have also said things that echoed with me like being a representative for the little people, the people without a voice. Some other things, not so much, but it would be a bad move for me to begin an application with criticism.

Your Senators now carry a grave responsibility – just ask Tony Windsor and Rob Oakeshott about that. With the balance of power they need to be familiar with every bill and every amendment. It’s a huge workload. I saw that Tony Abbott refused your request for extra personnel to help with the legislative workload, which is what prompted me to apply to help out. I will work for free for a period and if Tony changes his mind about that, and you find my work valuable, then a small stipend would be most helpful.

Obviously the carbon tax is a big issue that will require your attention in the immediate future. I have taken the opportunity to provide a brief summary for the Senators’ perusal with attached links should they require further reading. I am also happy to answer any questions should you or any of your iron force have one.

1. At the World Economic Forum in Davos, World Bank President Jim Yong Kim called for a price on carbon, requiring companies to disclose their climate risk exposure, and greater investment in green bonds in the fight against climate change.

2. The planet is “perilously close” to a climate change tipping point, and requires urgent cooperation between countries, cities and business, International Monetary Fund chief Christine Lagarde has said. Addressing an audience in London, Lagarde said reducing subsidies for fossil fuels and pricing carbon pollution should be priorities for governments around the world.

“Overcoming climate change is obviously a gigantic project with a multitude of moving parts. I would just like to mention one component of it—making sure that people pay for the damage they cause. We are subsidizing the very behaviour that is destroying our planet, and on an enormous scale. Both direct subsidies and the loss of tax revenue from fossil fuels ate up almost $2 trillion in 2011—this is about the same as the total GDP of countries like Italy or Russia.”

3. John Kerry has described the UN’s latest report on the science of climate change as “chilling” and warns of a “potential catastrophe” without urgent action. The US Secretary of State made the remarks at the annual Munich Security Conference held at the weekend, citing terrorism, radical sectarianism, food security, water availability, and climate change as the “great tests of our time.”

Kerry also highlighted the potential financial benefits of moving to a low carbon economy, pointing to the $6 trillion energy market that will gain an extra five billion users by 2050. “It is the mother of all markets, and only a few visionaries are doing what is necessary to reach out and touch it and grab it and command its future,” he said.

4. Christiana Figueres, executive secretary of the UN climate secretariat, said that it was amoral for people to look at climate change from a politically partisan perspective, because of its impact on future generations.

Figueres said that examples of recent extreme weather around the world were a sign climate change was here now. “If you take them individually you can say maybe it’s a fluke. The problem is it’s not a fluke and you can’t take them individually. What it’s doing is giving us a pattern of abnormality that’s becoming the norm. These very strange extreme weather events are going to continue in their frequency and their severity … It’s not that climate change is going to be here in the future, we are experiencing climate change.”

5. The independent Climate Change Authority, which advises on climate change action around the world, called for Australia to lift its emissions reductions goal from 5 per cent to 19 per cent to take into account international moves, Australia’s fair share and the urgency of the climate change threat.

Professor Garnaut believes the ultimate cost to the budget of the Abbott government’s climate policy could be much greater than $4 billion a year, given many countries are committing to more ambitious emissions reduction targets.

3.143 The committee recommends that the transition of the fixed carbon price to a fully flexible price under an emissions trading scheme with the price determined by the market occur on 1 July 2014.

5.129 The committee recommends that the Emissions Reduction Fund not be substituted for the carbon pricing mechanism.

7. Growing numbers of investors and now being attracted by three key benefits of wind farms:

The figures will startle many; with it outperforming all other investment options using current ASX figures and other key organisations that rate investment opportunities.

9. The solar PV industry employed about 13,600 as of late 2013, and the number will sink this year to about 12,300 across about 4300 businesses as state-based subsidies are wound back, according to a report for the REC Agents Association, a body representing firms that create and trade in renewable energy certificates.

The solar workforce, though, would dive immediately by 2000 if the government were to end support for the industry by scrapping the RET, with the total number of jobs lost or foregone swelling to 6750 by 2018, analysis of the research by industry group SolarBusinessServices found.

10. China is spending billions to control air pollution, banning imports of low-grade coal, launching carbon-trading markets, exploring shale gas, getting more efficient, and building the crap out of renewables. And remember, it has its own coal mines. They just couldn’t keep up with the boom. Now that things are leveling off, domestic Chinese coal will get cheaper, they’ll buy more of it at home, and there will be less market for imports.

Since China was the main driver, its rapid deceleration will serve as a drag on the whole seaborne coal market. Goldman Sachs analysts “expect average annual growth (in demand) to decline to 1% in 2013-17 from 7% in 2007-12.”

No less an investor than the mighty Warren Buffett has proclaimed that the decline of coal in the U.S. will be gradual but inevitable. Given flat demand for electricity, cheap natural gas, burgeoning renewables, rising efficiency, and future carbon regulations, new coal-fired power plants are a bad bet, which is why they aren’t getting built.

11. Economists are convinced that carbon pricing will yield the greatest environmental bang-for-buck at the lowest economic cost.

I hope this has been of use to you and your Senators in getting up to speed on the issue. I look forward to hearing from you in the near future to discuss terms of employment.

PS I looked into your idea about reducing natural greenhouse gas emissions but have been unable to think of a way to stop respiration, evaporation, organic rotting, volcanoes or farting, but I will keep working on it. By the by, cutting down trees is not a good start.