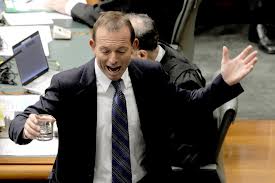 In the lead-up to the 2013 election, I don’t know how many times I cringed at the thought of Tony Abbott as President of the G20, and now he is there and it is even worse than I anticipated.

The ceremonies at the World Economic Forum in Switzerland opened with words sent by Pope Francis where he implored the elite in business and politics to exert their influence to reform economic policy with the poor and disadvantaged in mind.

“Those who have demonstrated their ability to be innovative and improve the lives of many people by their ingenuity and professional expertise can further contribute by putting their skills at the service of those who are living in dire poverty.”

In the Davos message he referred to his treatise Evangelii Gaudium, where he said the challenge of the world today is economics and inequality. In an era of considerable change and progress in areas like technology he said, “We must praise the steps being taken to improve people’s welfare in areas such as health care, education and communications.”

An annual risk report compiled by the World Economic Forum queried its members about what they think is the most pressing problem threatening the global economy in the next decade. They responded with inequality as the most likely risk.

The creator of the Davos Summit, Klaus Schwab, was pleased with the inequality finding because his philosophy is that capitalism cannot survive if income and wealth are concentrated in the control of a few, which is confirmed by the US Census Bureau statistics.

Oxfam executive director Winnie Byanyima, who will attend the Davos meetings, said: “It is staggering that in the 21st century, half of the world’s population — that’s three and a half billion people — own no more than a tiny elite (85 individuals).” The wealth of the 1 percent richest people in the world is 65 times as much as the poorest half of the world.

These fears are palpable and the concentration of economic resources is threatening political stability and driving social tensions and unrest globally. The pope’s message echoes concerns by others as well.

Christine Lagarde, managing director of the International Monetary Fund, is concerned that the fruits of economic activity in many countries are not being widely shared. Likewise, the humanitarian organization CARE says inequality around the world centres on lack of access to education, public health, chronic diseases, income gaps, and social inequalities such as gender discrimination.

A World Economic Forum report says the failure to mitigate and adapt to climate change is one of the top 10 risks facing the world in 2014.

Scientists say man-made climate change is likely to worsen starvation, poverty, lack of water, flooding, heat waves, droughts and diseases, raising the specter of more conflict and war, unless drastic action is taken to lower emissions of carbon dioxide from the burning of coal, oil and gas from their current trajectories

The global economy may continue to grow, scientists say, but if the global temperature reaches about 3 degrees F warmer than now, it could lead to worldwide economic losses between 0.2 and 2.0 percent of income.

Saadia Zahidi, Head of Gender Parity and Human Capital at the WEF said:

“This year is very relevant because we have collaboration with the United Nations Secretary General and the UNFCC, to try to build up towards the UN Climate Change Summit in September and use Davos to try to spark off a very large number of public-private collaborations. That’s going to be happen through approximately 35 climate change and sustainability sessions. We’re going to be looking at themes as diverse as scaling energy efficiency, reducing deforestation, looking at resilient cities and scaling investment for green energy.”

Al Gore spoke at a private session on how leaders can help prevent – and better communicate – catastrophic effects on public health, anti-poverty efforts, clean water and energy supplies from a rise in global temperatures above 4 degrees F.

“The climate conversation has to be won by those who are willing to speak up,” Gore told them. “It is a race against time, but we are going to win.”

The World Wildlife Fund joined many other groups calling on governments to commit to action.

“There’s a rising recognition that we simply have to find a way to break through,” Jim Leape, director general of Geneva-based WWF International, told AP. “The big governments each need to renew their commitment.”

South Korea’s President Park Geun-hye told the forum “the world must act as one” to tackle climate and environmental challenges.

The meeting was dominated last year by the Euro-crisis, but this year Schwab says will be different. “It will be an exciting meeting and it will be different from the last year’s because it will not be overshadowed by one single crisis.”

There will be a number of topics addressed including social inclusion and job creation. He did not elaborate on “social inclusion,” but this could suggest the social and economic inequality the members believe is a global concern.

Other topics are the war in Syria, structural changes in China’s economy, building resistance to natural disasters.

“What we want to do in Davos this year in this respect, is to push the reset button. Let me explain. The world is much too much still caught in a crisis management mode, and we forget that we should take ‘now’ into our hands and we should look for solutions to the really fundamental issues. We should look at our future in a much more constructive, in a much more strategic way. And that’s what Davos is about.”

Tony Abbott has used his opening address to the G20 Economic Forum in Switzerland to advertise that Australia is “open for business”, a line he apparently stole from David Cameron. He has stressed that the private sector should lead the way to prosperity while governments clear the path by removing regulations and lowering taxation. In fact, his speech was almost exactly the same as his election speeches, even to the point of criticising our previous government, something usually avoided on the international stage.

Abbott has had meetings with Australian big business people, who presumably accompanied him, and avoided any discussion of ‘unpleasantness’ like Syria or whales. He has stressed that the focus for the G20 under his presidency will be how governments can facilitate big business and free trade.

It was interesting to read a tweet by Chris Giles, Economics Editor for the Financial Times UK, who said

“Sign of the times. Rouhani packed out the hall. everyone is leaving before Tony Abbott explains Australia’s ambitions for the G20 in 2014″

So why the walkout? Were they not interested in our fearless leader’s economic guidance? Or is his agenda so far removed from the rest of the world that they just couldn’t be bothered wasting their time.

I think our Tony may be feeling a little out of his depth and somewhat alone, or he is purposely marching to the beat of a different drummer.