Since time immemorial, the worker has fended off constant attacks. PATH is another chapter in the Liberal’s playbook where they accurse the Proles to hell.

A Worker’s Labour is Valuable

The Liberal Party of Australia formed to oppose the workers’ parties. How Liberals and Labor view the worker are worlds apart. PATH is a clear example of this.

The basis of the Liberal ideology is to enable growth in the free market. They believe the cost of labour should be as low as possible. Turnbull’s Liberals believe a worker’s labour should be a cheap commodity. The incessant need to eradicate workers’ unions and weaken industrial labour laws are a testament to this.

One could strongly argue that the aspiration of full employment is not on the Liberal’s agenda. High numbers of unemployed people result in a much larger labour pool. This, in turn, drives wages down. Or in the case of PATH – the creation of an opportunity where labour is utilised for free.

The neo-liberal ideology aim is to purchase a worker’s labour as cheaply as possible. Ideologues like Turnbull and Cash, view a law passed to create a pool of free labour, such as PATH, as an exciting achievement.

The Australian Labor Party was borne from the struggle of the worker. They believe that a worker’s labour is valuable. In simple terms, they believe that the ‘supply’ side of labour has the right to participate in setting the value of the labour. Hence their close connections with the unions. In simple terms, Labour Unions are there to protect the working class from the disintegration of rights and fair pay as imposed by the ruling class.

From this perspective, laws that negate this right, disempower workers and remove individual agency.

This is a punishment inflicted upon the working class.

The Rise of the PATH

The Turnbull Government introduced the PATH Program in the 2016 budget. This bill passed the Senate on 10 May 2017; with the assistance of Cory Bernardi, Derryn Hinch, Nick Xenophon Team, Jackie Lambie, Pauline Hanson’s One Nation and Family First all supporting the Government.

Only David Leyonhelm opposed the Bill, along with Labor and Greens.

The PATH to Nothingness

The PATH program offers young job seekers an internship by contract with an employer. This contract legally reduces the value of a young jobseeker’s labour. The taxpayer pays the intern at a rate of $4.00 per hour.

The PATH scheme enables an employer to decrease the value of the intern’s labour by a minimum of 80% based on the scantest of entry-level wages in the country. 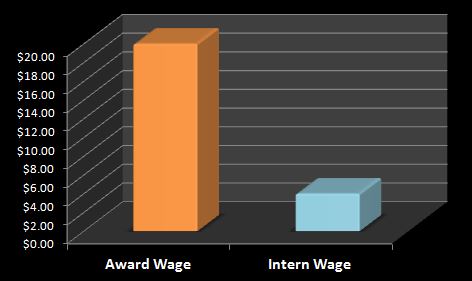 Business is at the Centre of the Framework

Internships are often painted as ‘work experience.’ However, work experience places the worker at the centre of the framework. Work experience is usually a short-term experience in a workplace. This enabled the worker to determine if they should invest in developing skills to seek future work in that industry.

PATH places business at the centre of the framework. An internship is:

The internship is designed around the needs of the host organisation and the intern’s skills, experience and interests. (Item 4, Sample Path Internship Agreement)

The employer must sign off to agree that they have a vacancy available now or in the near future. They have already identified that they need staff to meet operational requirements.

The employer is already in a willing position to outlay money on recruitment and selection of new staff. They are already in a position to employ a jobseeker in a casual, temporary or permanent capacity.

This is not an incentive to increase staffing. PATH is an incentive to reduce recruitment & labour costs for staff that the organisation has already identified are required.

Businesses can make considerable savings in induction, training and performance management costs during the probation period, in addition to recruitment and selection savings.

The PATH program enables an employer to try a number of potential employees for free. This also frees them from all the associated costs during the probationary period.

Businesses are able to increase profits through the tax payer funding the PATH program. This is not the same as work experience or on the job learning, such as an apprenticeship or traineeship. This is a free labour program dressed up ‘helping the jobless who seek to work.’

The PATH program strips workers of their own agency. The worker has forced upon them, a lower dollar value in exchange for their labour. Employers have an opportunity to reduce costs and increase profit.

Labour, raw materials and other overheads are the inputs in the production of goods or services. The through-put is the phase that mixes all inputs, including labour, together.

The cheaper labour is, the greater the profit for the employer. The Government is creating a legal way for employers to reduce the cost of one factor of production.

The PATH program simply offers employers a way to reduce the cost of developing their product or service, enabling them to make a greater profit.

The PATH program offers no guarantee of future secure employment. It does not offer a qualification that may be determined by the worker to be a sufficient value to trade for the monetary value of their labour.

What are the impacts on the emotional health of a young worker, if they are not retained? What are the supports in place?

Experience as a payment does not automatically equal the same value of labour. Labour is given in exchange for money, conditions and other benefits. There is no formal equivalent offered to the value of the loss of wages, such as a degree that has a beneficial use to enable the worker to sell their labour to another organisation.

There is no solid case that this experience will be valued by the young worker so much that it will negate any negative affect the young jobseeker will experience if they are not retained.

My main area of interest is emotions in the workplace. I would encourage other bloggers to approach the PATH program from the aspect of the emotional well-being of the intern. I strongly believe we need as many people as possible investigating this issue.

We are working people.
Work.
Struggle.
Even laugh about it sometimes.
None of us are winners.
We’re survivors
(Cameron Wolfe – Fighting Ruben Wolfe by Markus Zusak.)

These six lines boom, boom, boomed like a heart beating in the middle of page 25.

Marus Zusak has captured the essence of so many Australians. This is who we are.

The struggle of the working class in this country is a dire story. Sure, we have a history of hard fought victories. But as long as free marketeers live and breathe on the parliament floor, this struggle is endless.

Past struggle lives like a dormant beast within every single worker.

The scars that punctured the body and mind, the endless nights staring at jail cell walls and the lives lost, of those before us, embodies the beast which stirs within the heart of every worker.

The Beast of Past Struggle

When Liberals and Conservatives think they can take away agency of the jobless. When they insist upon total control of their spending with a plastic card. The beast of past struggle stirs.

When they deny us and our children the opportunity of a skilled education, to learn a trade or a profession. The beast of past struggle stirs.

When they make a rule that says the weekends are only important to people who can afford to not work on the weekend. the beast of past struggle stirs.

And when they think they have the right to tell young people who are desperate for work that their labour has no value. The beast of past struggle stirs.

In a civilised society, labour is purchased for its determined worth, not stolen through the rule of badly designed laws.