Are you angry enough yet? That is the question March Australia would like to know. In 2017, March in March are taking it to the streets again!

In 2014, Tony Abbott and the Liberal National Coalition Government saw the anger well up in so many people and March in March took it to the streets. Three years later the Australian people are still angry and Malcolm Turnbull, like Tony Abbott before him, still does not have a positive or progressive agenda.

Although this morning on Twitter John Wren thinks he knows where the Prime Minister’s agenda might be. If only Irona was not on holidays! ????

.@RachelBkr @Tim_Beshara Has @turnbullmalcolm looked behind the cushions on the couch? Maybe his agenda is there? #auspol

The Liberal and National Coalition Government is still NOT listening to the people and March in March is BACK!

The Liberal Government has failed miserably under Tony Abbott and Malcolm Turnbull and the list of things the Australians are angry about is almost endless.

It is time to Stand Up Australia! Instead, this year bring your best banners of Fizza, as the Lyin King has been removed and replaced! Thank you Australia! Give yourselves a round of applause!

How Many are YOU Angry About?

Here is the list presented by March in March as some of the things you may be angry about. If you are angry about any of these things, something else, or maybe just the flat-out incompetence of the Turnbull Coalition Government – then get amongst it. Boots on the ground people! 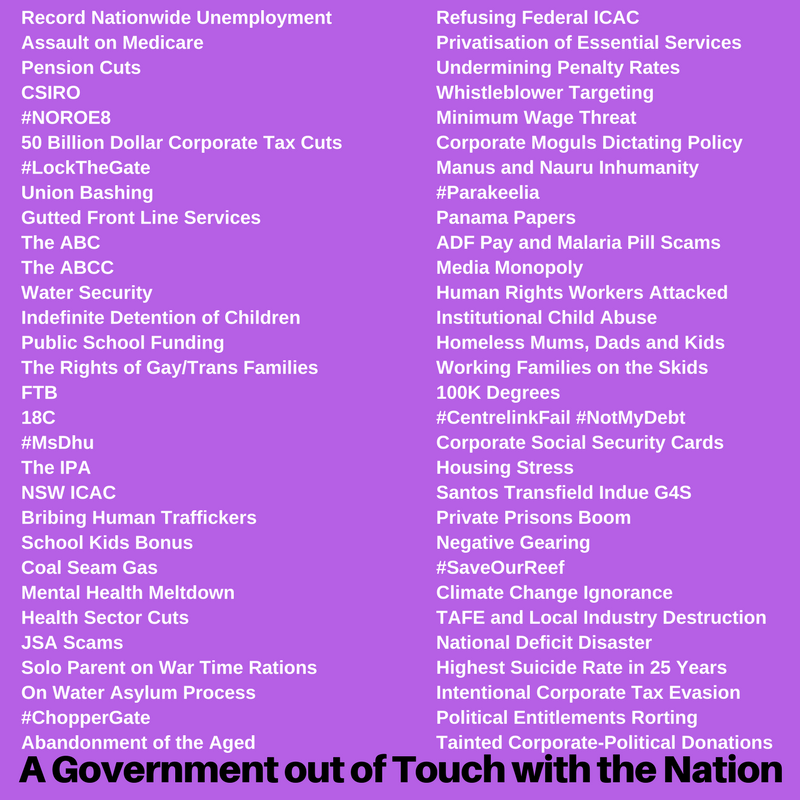 March in March – Get Involved Today!

Watch the Video below for how to get involved today; or visit the March Australia Activist Interchange Facebook Page:

What is the Point?

Boots on the Ground does make a difference.