After reading that 27% of energy is generated from renewables in Germany, Gregor Ptok asked himself the obvious question: why isn’t this happening in Australia? “Initially I didn’t do anything much with it, but remembered about the Renewable Energy Target (RET) review . . . but was in two minds about whether I should go to the effort of putting a submission in. On the Friday morning when the submission was due, I was reading The Lorax to my son – as stated in my submission (see below), it was the first time I had come across the story. At that point I decided to ‘speak up’ and contribute to the debate. It’s his future that we’re stuffing up and I at least want to be able to say that I tried what I could to mitigate the impacts”.

Edited Submission to the review of the renewable energy target

I just read Dr. Seuss’ The Lorax for the first time when reading it to my son. But more about that later. First, I would like to share some thoughts about long-term impacts of government decisions.

The long-term impacts of some decisions made now will be significant. I’m not thinking about 10 years’ time when the budget may be balanced, but 2080 – when I will no longer be here, but my children and their children will. Is the best we can leave them: “a balanced budget” and $12.4bn worth of Joint Strike Fighters? If even one less aircraft was ordered, that would free up $214m for other uses. What effect will one less aircraft have if Australia gets attacked by China? Very little, I would argue.

What will people need in 2080? We can’t be sure how technology changes, but they will still need water, food and shelter. What are we doing to ensure these necessities will be provided in the futures?

My hope against hope is that governments surround themselves with wise advisers. Mature, experienced people who have learned to critically evaluate different viewpoints, balance the short-term and long-term impacts of their recommendations, do thorough risk-assessment and who have compassion for all. People, who strive to leave a legacy that reaches beyond the “bottom line”; one that builds a sustainable, thriving community. A community that is able to pull together to navigate the black swan events that may occur – not just in response to external threats (which would necessitate Joint Strike Fighters), but to the very fundamental threats that The Lorax refers to – resource depletion. If you think of a glass of water, at some stage it is half empty (or half full, whichever way you prefer), but ultimately it will be empty if you keep drinking. The same principle applies to oil, which is the very lifeblood of our current economy. It applies to a lot of other things as well as Richard Heinberg’s Peak Everything so aptly demonstrates.

Taleb wrote about black swan events. My apologies for referencing Wikipedia, but I don’t have enough time at the moment to read the full book.[1] A black swan event is an event that comes as a surprise, has a major effect, and is often inappropriately rationalised after the fact with the benefit of hindsight. Examples given include the internet, personal computer, World War 1, the dissolution of the Soviet Union or the September 2001 attacks:

The phrase “black swan” derives from a Latin expression; its oldest known occurrence is the poet Juvenal’s characterization of something being “rara avis in terris nigroque simillima cygno” (“a rare bird in the lands and very much like a black swan”). In English, when the phrase was coined, the black swan was presumed not to exist. The importance of the metaphor lies in its analogy to the fragility of any system of thought. A set of conclusions is potentially undone once any of its fundamental postulates is disproved. In this case, the observation of a single black swan would be the undoing of the logic of any system of thought, as well as any reasoning that followed from that underlying logic.

Juvenal’s phrase was a common expression in 16th century London as a statement of impossibility. The London expression derives from the Old World presumption that all swans must be white because all historical records of swans reported that they had white feathers. In that context, a black swan was impossible or at least nonexistent. After Dutch explorer Willem de Vlamingh discovered black swans in Western Australia in 1697, the term metamorphosed to connote that a perceived impossibility might later be disproven.

The main idea in Taleb’s book is not to attempt to predict black swan events, but to build robustness against negative ones that occur and be able to exploit positive ones. Taleb contends that banks and trading firms are very vulnerable to hazardous black swan events and are exposed to unpredictable losses. On the subject of business in particular, Taleb is highly critical of the widespread use of the normal distribution model as the basis for calculating risk. For example, a paper produced by academics from Oxford University and based on data from 1,471 IT projects showed that although the average cost overrun was only 27%, one in six of the projects had a cost overrun of 200% and a schedule overrun of almost 70%.

In the second edition of The Black Swan, Taleb provides “Ten Principles for a Black-Swan-Robust Society”.

A common strategy to mitigate risks is not to put “all the eggs in one basket”. By reducing the RET, one strategy that seems to be working to encourage greater use of renewables (and thus more eggs in terms of energy generation) will be negated.

There is a country which in the last quarter generated 27% of its energy from renewable sources[2]: Germany. It generated 40.2bn KWh from renewable sources[3], which equates to 40,200 GWh. A country with less sunshine and landmass than Australia (though admittedly a higher population), in the last quarter generated the equivalent of Australia’s expected annual RET in 2020. If there was a will to invest less in a few strike fighters, Australia could be on the way there now.

I hope your recommendations will create the foundation for mitigating risks in energy generation not just for this generation, but for my son’s generation as well. And due to the time-lag usually involved in energy programs, leaving a balanced budget – in my view – does not count as risk mitigation. I take out a mortgage to build a house and spend a long time paying it off. Investment in renewable energy infrastructure is one investment I believe we should be willing to pay off for a longer timeframe as well. Or we could re-allocate some funding from the defence budget.

A different world is possible. Borrowing language from Dr. Seuss’ The Lorax again: Are we Once-lers or someone who cares a whole awful lot?

If Australia were to have Germany’s renewables energy generation capacity, in 2012 we could have sourced 53.65% of our energy from renewables.[4] Whilst there are arguments around baseloads, etc. this is just one image to show what that would look like: 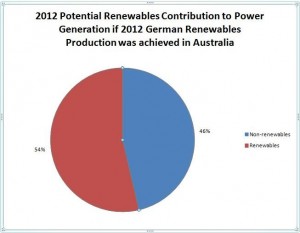 [1] Information in this paragraph and the following quotes: http://en.wikipedia.org/wiki/Black_swan_theory